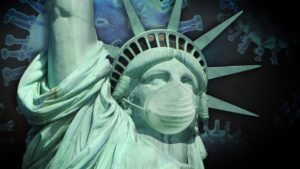 “As U.S. Coronavirus Cases Hit 3.5 Million, Officials Scramble to Add Restrictions” was the New York Times headline on July 16th. Reading much of the media in the USA now, there is a clear impression that the numbers of cases are increasing significantly, leading some states to impose further restrictions, even as other states open up. The New York Times statistics shows clearly how varied the outbreaks are, with some states having very few cases, while in others, cases are increasing.

The article states that even though there is much more testing than before, which may partially account for the increased numbers, there also seems to be an increased number of hospitalizations, patients in ICU, on ventilators and subsequent mortalities. However, it also recognizes that the overall death rate is still much lower than it was back in April, when the peak of mortalities occurred. Therefore, even if the figures are about the increase in the numbers of cases now, the impact on hospitalisations and the number of mortalities is, overall, significantly less than it was before. Does this bring the question back to whether the biggest factor in the increasing number of cases is due to the increased testing.The challenge in interpreting these numbers is that it is not always clear how well the tests are working and also the way in which the numbers are being reported and counted. The article makes the following statement – emphasis is ours:

“In data for the United States, The Times is now including cases and deaths that have been identified by public health officials as probable coronavirus patients. Some states and counties only report figures in which a coronavirus infection was confirmed through testing. Because confirmed cases are widely considered to be an undercount of the true toll, some state and local governments have started identifying probable cases and deaths using criteria that were developed by states and the federal government.

Governments often revise data or report a large increase in cases on a single day without historical revisions, which can cause an irregular pattern in the daily reported figures. The Times is excluding these anomalies from seven-day averages when possible.”

The article also refers to another article published in the New York Times in April, which it states that the likely death rate due to COVID19 is likely higher than the official figure, due to a lack of .testing at the time.

So far in the USA, according to that article: “More than 3,512,700 people in the United States have been infected with the coronavirus and at least 137,300 have died, according to a New York Times database”

“The United States on Wednesday reported more than 67,300 new infections across the country, according to a New York Times database. It was the nation’s second-highest single-day total and roughly 1,000 cases shy of the record set last week.

“Because the number of people hospitalized and the percentage of people testing positive is also rising in many of those places, the case spike cannot be solely explained by increased testing. Still, coronavirus deaths remain well below their peak levels. And as some places reimpose restrictions, others continue to reopen their economies.”

Admittedly, it is not an easy task and the New York Times’ journalists are going to a lot of effort to report on the numbers of cases as best they can. However, it needs to be recognized that this issue is being influenced by many factors and it is clear that President Trump’s ongoing spat with Dr Anthony Fauci, head of the National Institute of Allergies and Infectious Diseases (NIAID), and the government’s spokesperson on COVID19, reflects some political as well as personal tensions. It is in the interest of the president to get “America working again”, while his opponents think they will gain political capital from continuing the crisis. Dr Fauci is very much wedded to the agenda of Bill Gates, with the mantra of a vaccine or, while we wait for it, the expensive drug Remedsevir as the only solution to the crisis, so they see advantages in exaggerating the situation. Everybody seems to have an opinion on what is happening, including this blog. We feel that increasing evidence show the figures are being manipulated and taken out of context. The overall mortality of COVID19 is tragic, but it hasn’t justified the actions taken across entire populations, especially since young and healthy people are largely unaffected. However, organizations like the Gates Foundation, CDC, NIAID and WHO are closely aligned with the drug companies who are already making, or will in the event of a successful vaccine, vast profits from the crisis. We don’t believe these organizations can be trusted to drive the narrative. By their own admission, they are deeply committed to a specific agenda, dominated by Big Pharma and Big Tech industries, including the threat of mandatory vaccines, digital I.D. and immunity passports that could be used to coerce cooperation from citizens. They have made this clear and we feel this needs to be challenged. The stakes are too high to entrust our lives and freedoms to these organizations.

As a result of these figures, schools in many states are reluctant to return to normal and are planning to teach online classes from September, in spite of President Trump’s declaration that schools should open. The wearing of masks has been a focal point for many people, some seeing them as essential, while others see them as being a fundamental infringement of basic liberties. The Governor of Georgia has forbidden authorities to mandate the use of masks in public places whereas the Governor of Alabama has mandated their use in public.

Trusting the figures and their significance?

There are many reports of doctors speaking out about how death certificates are being completed. One experienced doctor from Minnesota, who also sits on the state Senate, spoke out about the memo he had recieved instructing him to report a death as COVID19 even when there were no specific indications. He also repeated Dr Fauci’s opinion in the New England Journal of Medicine in March, that it was likely COVID19, in terms of deaths, would be about the same as a severe flu season. Dr Scott Jensen is now being investigated by the Minnesota Board of Medical Practice for spreading misinformation (about the death certificates, even though he has the memo he was sent) and giving reckless advice ( repeating what Dr Fauci had said in the NEJM). He stands to lose an exemplary career for doing the right thing.

One of the most important things to look at is the age of people who are dying. This is vital in understanding the risks for the general population and whether schools should open again, whether masks should be worn or not, and the significance of other social isolation strategies. Are these strategies imposing unnecessary and possibly coercive limits on freedom of movement?

Based on the mortalities in New York, which can be seen as representative of the country, it is clear that for the vast majority of people, COVID19 is not a great risk. This alone should make us question much of what we are being told is necessary, including the insistence that a global vaccine is the only solution. Given that the vast majority of people are not at significant risk, a vaccine would not necessary, even if it was shown to work and proven to be safe, which is still an unknown at this point.

The mortality rate for New York for July 14th.

From these figures it is clear that the vast majority of people dying of COVID19 are over 75 years of age. Reports of large numbers of younger and healthy people dying, as repeated in the media, is not supported by the figures.

It is important to get information from various sources in order to verify what is happening. All sources of news have their own point of view, and despite our best attempt at balanced reporting, we have a point of view. It’s hard to say that one source is more “scientific” than another, given that the way in which figures are being potentially manipulated can alter the conclusions being drawn. The following is a chart taken from ourworldindata: 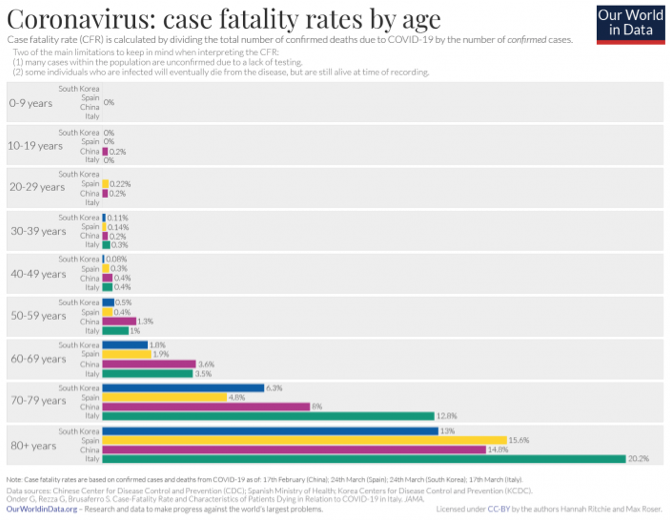 The chart shows that the case fatality rate in 4 countries is spread amongst the same demographic groups as New York and the rest of the country. Similar statistics were shown in our article on Sweden.

There are many places to go for up to date information, but we can recommend the following video by Dr. Paul Thomas, from Portland, Oregon who discusses the evidence for the use of masks and social distancing, and analyzes the US data coming from John Hopkin’s University. We suggest people do their own research and really look at whether the current figures showing an increase in cases, does mean that more people are getting very sick and whether ongoing restrictions are justified.

It is important that the risks of the pandemic are seen in context of the strategies being implemented and that the governments of the world are able to make decisions based on the real facts and are not manipulated by special interests for their own agendas. The price to pay for wrong decisions are huge, both individually and for the social and economic wellbeing of countries globally.

One thought on “What do COVID19 Numbers Mean in the USA?”