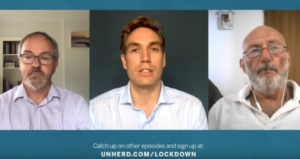 Two eminent British epidemiologists, Dr Tom Jefferson and Prof Carl Heneghan take part in a wide ranging discussion on UnHerd – they cover the COVID19 issues that are causing so much confusion. Interesting these scientists are rarely
interviewed by the main stream media.
LockdownTV and UnHerd’s interviews  Professor Carl Heneghan, director of the Centre for Evidence-Based Medicine and a practising GP, and Dr Tom Jefferson, editor of the Cochrane Collaboration’s acute respiratory infections group in Rome.
3:55 – Masks • Tom Jefferson: “Aside from people who are exposed on the frontlines, there is no evidence that masks make any difference, but what’s even more extraordinary is the uncertainty: we don’t know if these things make any difference…. We should have done randomised control trials in February, March and April but not anymore because viral circulation is low and we will need huge number of enrolees to show whether there was any difference”. • Carl Heneghan: “By all means people can wear masks but they can’t say it’s an evidence-based decision… there is a real separation between an evidence-based decision and the opaque term that ‘we are being led by the science’, which isn’t the evidence”.
9:26 – Pandemic life cycle • CH: “One of the keys of the infection is to look at who’s been infected, which shows a crucial difference when comparing the pandemic theory to seasonal theory. In a pandemic you’d expect to see young people disproportionately affected, but in the UK we’ve only had six child deaths, which is far less than we’d normally see in a pandemic. The high number of deaths with over-75s fits with the seasonal theory”.
14:00 – Covid seasonality • CH: “The stability of the virus is far less when the temperature goes up but humidity seems to be particularly important. The lower the humidity, the more stable the virus is in the atmosphere and on surfaces… It’s now winter in the southern hemisphere, which is why places like Australia are suddenly having outbreaks.”
20:37 – Lockdown • CH: “Many people said that we should have locked down earlier, but 50% of care homes developed outbreaks during the lockdown period so there are issues within the transmission of this virus that are not clear… Lockdown is a blunt tool and there needs to be intelligent conversations about what mitigation strategies can keep society functioning while we keep the most vulnerable shielded”.
25:20 – Nightingale hospitals • CH: “They are the wrong structure. What you need is fever hospitals which were here until around the 1980s or 90s. They were on single floors and had isolation within isolation. Theere were no lift shafts and staff were trained, which meant that everyone was protected from each other… It looks like at leats 20% of people got the infection while they were in hospital”
27:30 – Suppression strategy • CH: “The benefits of the current strategy are outweighed by the harms…When it comes to suppression, only the virus will have a determination in that. If you follow the New Zealand policy of suppressing it to zero and locking down the country forever, then you’re going to have a problem… This virus is so out there now, I cannot see a strategy that makes suppression the viable option. The strategy right now should be how we learn to live with this virus”
32:45 – Response to the virus • TJ: “I am a survivor of four pandemics and for the other three, I didn’t even realise they were going on. People died but nothing changed and none of the fabric of society was eroded like this response… Do I see steps being taken at a European level about learning from our mistakes and changing policies? The answer is no…
39:30 – Politics of the virus • CH: “We as individuals are part of the problem because sensationalism drives people to click and read the information. So it’s a big circle because we’ve created the problem — if we put the worst case scenario out there, we will go and have a look. If you want a solution, you’ve got to get people to stop clicking on this sensationalist stuff”.
43:30 – IFR • CH: “We will be down about where we were with the swine flu: around 0.1-0.3% which is much lower than what we think because at the moment we are seeing the case fatality”. • TJ: “If you look at the whole narrative, it was distorted from the very beginning by the obsession with influenza which was just one or two agents and nothing else existed. We’re no different now”.
Comments:
Refreshing common sense discussion. The two doctors clearly take the position that lockdown is not the only solution and that other precautionary measures for any future outbreak are not in place. Government focus is still on expensive vaccine and drug solutions involving £billions and not on the simple preventative measures based on good public health policy.
Facebook0Tweet0Email0