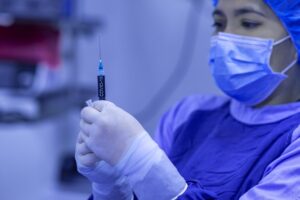 Pfizer and its German partner BioNTech thrilled the world with a press release stating that its vaccine is 90% effective. There was a global exhale, finally the end was in sight. At this point there was only a press release and the news that Pfizer’s CEO had cashed in 62% of his shares as the stock leapt in value.

Nonetheless, the UK government announced that they had secured 40 million doses of the vaccine and would be rolling it out in early December. Vaccination stations are being created and the personnel put in place. The only discussion seems to be about which section of the population will receive the vaccine first. It was to be frontline health workers, but there has apparently been some resistance, and it will now be given to elderly care home residents, despite the lack of testing on the elderly and those with co-morbidities, and the workers who care for them.

At this point there remains very little published data apart from the 90% effectiveness, and the recent news that it is thought the two dose vaccine will confer approximately 90 days of immunity on the recipient.

It seems important to understand that this vaccine is currently unlicensed, given emergency authorisation by the MHRA and complete indemnity from any harm to the manufacturers, those dispensing the vaccines – GPs and healthcare workers and presumably also the army who will be drafted in, as well as the volunteers currently being recruited, who, according to the recruitment information, need have no prior experience in healthcare.

So how effective is the Pfizer/Biotech vaccine?

Pfizer has so far run short term Phase 1 and 2 trials, the usual requirement for animal testing being waived for all the COVID19 vaccines.

The prediction of how effective any vaccine will be in a population, extrapolated from limited trials, can get complicated and is easily distorted, but it’s important to understand at least the implications. Allan Cunningham in the British Medical Journal explains the issues with Pfizer’s “more than 90% effective” statement.

“Pfizer’s vaccine “may be more than 90% effective.” (Mahase, BMJ 2020;371:m4347, November 9) Specific data are not given but it is easy enough to approximate the numbers involved, based on the 94 cases in a trial that has enrolled about 40,000 subjects: 8 cases in a vaccine group of 20,000 and 86 cases in a placebo group of 20,000. This yields a Covid-19 attack rate of 0.0004 in the vaccine group and 0.0043 in the placebo group. Relative risk (RR) for vaccination = 0.093, which translates into a “vaccine effectiveness” of 90.7% [100(1-0.093)]. This sounds impressive, but the absolute risk reduction for an individual is only about 0.4% (0.0043-0.0004=0.0039). The Number Needed To Vaccinate (NNTV) = 256 (1/0.0039), which means that to prevent just 1 Covid-19 case 256 individuals must get the vaccine; the other 255 individuals derive no benefit, but are subject to vaccine adverse effects, whatever they may be and whenever we learn about them……We’ve already heard that an early effect of the vaccine is “like a hangover or the flu.” Will vaccinees who are later exposed to coronaviruses have more severe illness as a result of antibody-dependent enhancement of infection (ADEI), a known hazard of coronavirus vaccines? Is there squalene in the Pfizer vaccine? If so, will vaccinees be subject to autoimmune diseases, like Gulf War Syndrome and narcolepsy that have been associated with the adjuvant?

We already know that current Covid-19 vaccine trials are unlikely to show a reduction in severe illness or deaths. (Doshi, BMJ 2020;371:m4037, October 21) Will they be like seasonal influenza vaccines, which have not proved to be lifesavers, and may even have increased overall mortality in the elderly? (Anderson et al, Ann Intern Med 2020;172:445) We need a lot more time and a lot more data, especially in view of far reaching uncertainties about Covid-19 case definitions and statistics.”

Just to let that sink in, “90% effective” means that 256 people will need to get the vaccine and risk potential adverse effects, for one of them to be protected.

Despite all the claims from drug companies and governments, there have been no medium or long terms studies done regarding safety.

Nonetheless, there are already suggestions that the possibility of society getting back to normal (the promise once a vaccine was available) will be incumbent on getting the vaccine. Without proof of vaccination, it’s suggested that travelling, even on public transport and live events – Ticketmaster have announced that people will have to show proof of vaccination or a negative test in order to purchase a ticket, will be impossible. At the same time, government spokespeople are already alluding to the fact that even with a vaccine available, restrictions, social distancing and the wearing of masks will need to continue into the future.

The protocols of all the vaccine trials in the race do not include the need to show effective prevention of infection with the virus or transmission of the virus, nor prevention of serious symptoms, and maybe most importantly, prevention of death. Pfizer’s press release raises many serious questions that need to be answered before this vaccine is rolled out. The report says that it does not show that the vaccine prevents COVID19. It is only focusing on the result of 94 people, which is 0.2% of the total, and already there is talk of Pfizer giving the vaccine to the placebo group, based on its apparent efficacy, which would make any further research null and void.

Peter Doshi, the associate Editor of the British Medical Journal sums it up when he said that “the lack of data is very concerning… all we have right now is a headline by Pfizer.”

The UK government has its own concerns about the potential for harmful effects from the vaccine, given its recent contract with Genpack for their AI monitoring of the “expected high volume of adverse effects”.

Pfizer, like the other main candidates in the vaccine race, has a long history of fraudulent behaviour, including the largest healthcare fraud settlement to date.

Since their press release Pfizer have said they are ready to send out hundreds of millions of doses of the vaccine before the end of the year. They are still waiting for the US Food and Drug Adminstration (FDA) to make an Emergency Use Authorization (EUA).

The vaccine will cost seven times more to store, transport and distribute than other potential vaccines and presents difficult logistical problems. The UK government has already purchased 40 million doses, although less than a million are currently available, the rest to be delivered in early 2021. Given all the unknowns at this point, Pfizer and the UK government seem to have gone for a politically and financially advantageous “first place”, rather than a considered decision based on what is needed and what is safe.

Dr Mike Yeadon, a former VP of development for Pfizer, a 32 year veteran of the pharmaceutical industry and only one of an increasing number of eminent scientists, has accused the UK Secretary for Health, Matt Hancock, of a rash and unprecedented move, involving an experimental vaccine using novel technology that has never been used before in the history of the vaccine industry, and based on the results of such a small trial.

Rolling out the vaccine to the population will be an enormous task and involve GP facilities across the country, incentivised by a £25 fee per patient given the two-dose vaccine. This has the potential to make GP services even harder to access than they have been during COVID19, with the increased reliance on phone consultations. How GPs will manage the important legal issue of fully informed consent during such circumstances is not known. How this fundamental human right will be managed by the armed forces and the vaccine volunteers recruited in the roll out is even more in question.

According to a recent letter in the British Medical Journal, it may not be clear whether the Vaccine Damage Payment Act of 1979 will cover potential harm from this vaccine, especially in those over the age of 21. The government has initially reassured the public that should they suffer serious adverse effects, they will be able to claim a maximum of £120,000.

With data piling up that this year of COVID19 will turn out to be no worse than a bad flu season in terms of deaths and hospitalisations, the first question must surely be is a vaccine even needed at this point?

2 thoughts on “Pfizer: What Does 90% Effective Really Mean?”