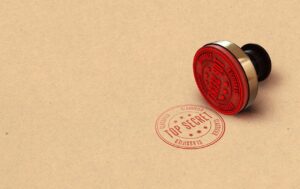 The Scientific and Advisory Group for Emergencies (SAGE) in the UK, was for a while the secret group, advising the UK government of matters relating to COVID19.  After pressure from the media, the members were revealed and minutes of their meetings published. The group included Dr Patrick Vallance, the UK Chief Scientific Officer and ex board member of GlaxoSmithKline, the world’s biggest vaccine maker, a number of behavioural scientists and tech and data experts. Dominic Cummings, the Prime Minister’s chief advisor, and not a scientist, also controversially attended.

In May 2020 SAGE was quietly replaced by a new group driving government policy: the Joint Bio-Security Centre (JBC), an even more secret group. The group has been allocated a budget of £9 Billion and charged with setting policy for COVID19 and “other future similar disease threats”. It is said that it will work similarly to the Joint Terrorism Analysis Centre (JTAC) which analyses terrorism threats and sets threat levels. According to the article on May 12th, by the charity, the Institute for Government:

“The government has said this centre will lead a new biosecurity monitoring system. It will bring together experts on disease incidence and control (epidemiologists) with other analysts from across government to give ministers, via the chief medical officer, joined up advice on decisions about managing the disease.”

“The centre will have two main jobs. The first is as an independent analytical function to provide real-time analysis about infection outbreaks. It will look in detail to identify and respond to outbreaks of Covid-19 as they arise. The centre will collect data about the prevalence of the disease and analyse that data to understand infection rates across the country.

Its second job is to advise on how the government should respond to spikes in infections – for example by closing schools or workplaces in local areas where infection levels have risen. Should UK government ministers decide to impose different restrictions in different areas and regions across England, it will be on the advice of the JBC.

In June the government announced that Dr Clare Gardiner, a director at the National Cyber Security Centre with a background in medical statistics and epidemiology, would head up the centre. She takes over from Home Office official Tom Hurd, who briefly led the JBC in its early phase. The government has not announced the wider membership or staffing of the JBC. If it follows a model used by many other independent bodies it could be staffed by civil servants and informed by a standing team of experts.

The government has also said that it will consider whether the JBC should form part of an extended and ongoing infrastructure to address biosecurity threats. SAGE is an ad hoc grouping with a changing membership to deal with a wide variety of emergencies.

The government has not yet said what the new centre will publish or how transparently it will operate, beyond saying that the new Covid-19 alert level will “communicate the current level of risk clearly to the public”.

The article also stated that the JBC will take a more active role than SAGE in advising ministers on other disease outbreaks. It sits within the Test and Trace service in the new Ministry of Health and Social Care, that recently replaced Public Health England.

Back in May, concerns were raised over the formation of this new group, whose remit seemed to include the collection and storage of the public’s data, and gave concern that it would be used as part of an ongoing surveillance mechanism by the government. Furthermore the temporary head of the JBC was not a doctor, but was at the time, being considered as head of the UK security apparatus, MI6. He was also an old Eton school mate of Boris Johnson.

While SAGE was an advisory group the JBC will be permanent and significantly funded with a £9 billion budget.

The government is investing £9 billion in the Joint Biosecurity Centre due to failures to invest in local health systems over the years, the government’s chief medical officer has said.

Chris Whitty gave the figure during a House of Lords Science and Technology Committee hearing on 17 July as part of its inquiry on the Science of Covid-19.

“The fact that so much resource has rightly had to be put into the JBC is because of this fact that we really have not invested in health protection over the last several years,” Whitty said, answering a question about the UK’s local public health capacity for management of the pandemic during a potential second wave of Covid-19. “I think we should all be honest about that.”

The details of the new centre have been scarce so far, with some critics calling it out for secrecy.

While a national response is “usually the most effective way” to deal with the beginning of a large-scale epidemic, he said there was now a need for a more localised response.

“The more we get down to this later stage, with much lower numbers, [and] very, very different problems in different places, the more local responses are absolutely critical.

Commenting on the function of the JBC, Whitty said it would take an operational role in collaboration with Public Health England.

“What it’s not doing, at least in its current form, is the job that Sage [the Scientific Advisory Group for Emergencies] is doing at pulling together science from multiple disciplines for the wider epidemic.”

The government’s chief scientific adviser Patrick Vallance added that there was a “very important distinction” between JBC and SAGE.

As Patrick Vallance states above, the JBC is an operational group, and a permanent part of the government health apparatus, with its primary focus Bio-Security. Its remit still seems unclear and justification of the vast budget is so far not forthcoming.

In June, it was stated that the JBC would not be fully operational until the end of summer. In the interim, we can only assume that members of SAGE are still advising the government on their COVID19 strategy.

In September we have seen a significant increase in Pillar 2 testing (in the community). Reports of a ‘second wave’ are hitting the headlines with a reported “exponential rise” in ‘cases’. And yet, the number of positive PCR tests are being reported as cases, even though the majority of people have no COVID19 symptoms. Hospitalisations nationwide are few and deaths almost non-existent.

It is hard to justify the current strategy of possible renewed lockdowns given that unreliable PCR tests results are being reported as actual cases. The government is now introducing the Moonshot project where testing will be increased to 10 million tests a day, run by private companies and cost almost the equivalent of the annual UK National Health Service budget ( £130 billion).  On September 15th the Daily Mail article reported:

The radical government plans could see up to 10 million coronavirus tests carried out every day by early next year in a drastic expansion of the existing programme.

It comes after the Prime Minister yesterday effectively put Christmas celebrations on hold, as he warned that draconian new restrictions on gatherings of more than six people could be here for months – while chief medical officer Chris Whitty pointed the finger at ‘Generation Z’ for sparking a surge in cases.

Addressing the nation at the first No10 press conference since July, the PM said the spike in infections seen over the past week left him no choice but to tighten lockdown across England for the first time since March.

In a bid to avoid further reversals, a memo was sent to Nicola Sturgeon and other Scottish cabinet secretaries, outlining mass testing proposals ‘to support economic activity and a return to normal life’, according to the BMJ.

The memo states: ‘This is described by the prime minister as our only hope for avoiding a second national lockdown before a vaccine, something the country cannot afford.’

The government currently spends £130bn on the NHS in England each year, so such a move would almost match the amount of funding pledged to the entire health service, which in itself represents some 20 per cent of all public spending.

It also equates to the cost of the nation’s education budget and represents a near-30-fold increase in the UK’s testing capacity, with just 350,000 daily tests being carried out at the moment.”

However, even Patrick Vallance and Chris Whitty had doubts:

“Two of the government’s biggest scientific advisers are among the sceptics, fearing tens of millions of people could be wrongly told to isolate.

Prof Whitty poured cold water on the idea that millions could be tested daily any time soon while chief scientific officer Sir Patrick Vallance said it was not a ‘slam dunk that can definitely happen’.

‘And I think it’s important that what we don’t do is pin ourselves to a date and say, ‘By this time, this will be achieved’, because we do have to be absolutely sure that these tests work, and they work at scale.’”

The extraordinary amounts of money proposed for these activities, involve private companies and involves no parliamentary scrutiny.

For a government that pleaded poverty for 12 years while they decimated social services, there suddenly seems to be an infinite amount of financial capital available, at a time when the UK economy is on its knees.

The level of goverment secrecy  regarding the original SAGE team, has been amplified with the establishment of a new more secretive and expensive “Joint Bio-Security Centre”. In the process, the government infringes on the public’s civil rights without being held to account by politicians of any parties. It is a continuing arrogant and contemptuous abuse of power under the cover of COVID19.