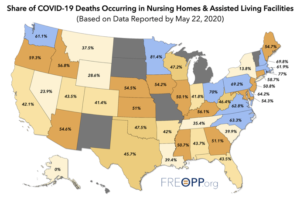 As more information surfaces about how individual states handled the directive to “protect the elderly” some stark and tragic differences are coming to light. The comparison between New York and Florida highlights the cost paid by families and their loved ones. 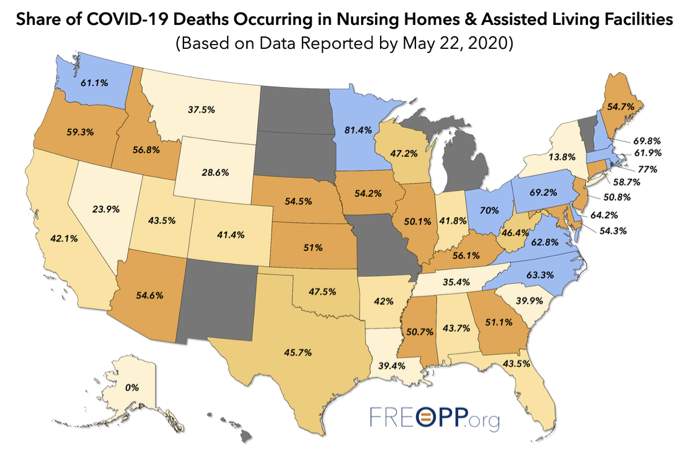 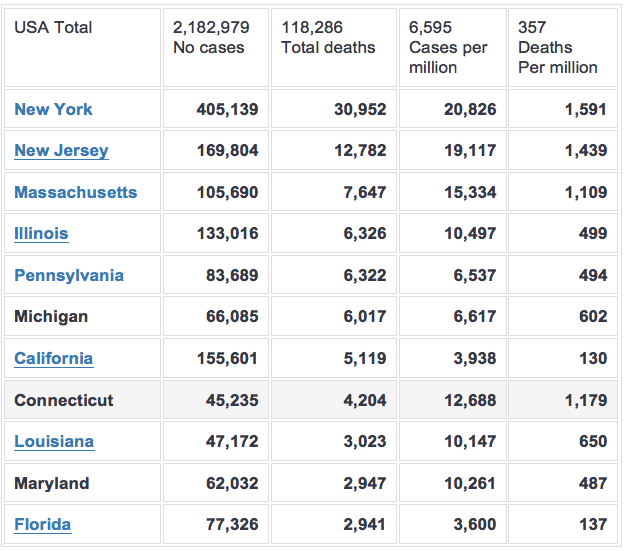 Statistics above from Worldometers/info: June 16th 2020

Forbes published an article on May 26th, explaining just how concentrated COVID19 deaths really are in a single population, titled “The Most Important Coronavirus Statistic: 42% Of U.S. Deaths Are From 0.6% Of The Population,”  the article explains:

Forbes also points out that the risk coronavirus-type illnesses represent to nursing home populations is nothing new:

The tragedy is that it didn’t have to be this way. On March 17, as the pandemic was just beginning to accelerate, Stanford epidemiologist John Ioannidis warned that “even some so-called mild or common-cold-type coronaviruses have been known for decades [to] have case fatality rates as high as 8% when they infect people in nursing homes.” Ioannidis was ignored.

In his recent meta-analysis on the real Infection Fatality Rate of COVID19, Dr. Ioannidis explained the policy error in New York that likely contributed to thousands of preventable deaths: “Massive deaths of elderly individuals in nursing homes, nosocomial infections, and overwhelmed hospitals may also explain the very high fatality seen in specific locations in Northern Italy and in New York and New Jersey. A very unfortunate decision of the governors in New York and New Jersey was to have COVID-19 patients sent to nursing homes.”

Dr. Ioannidis also mentions the choice by medical personnel in New York to quickly put patients on ventilators, which doctors now realize likely does more harm than good: “Use of unnecessarily aggressive management (e.g. mechanical ventilation) may also have contributed to worse outcomes.”  An article in Business Insider noted that,“80% of NYC’s coronavirus patients who are put on ventilators ultimately die, and some doctors are trying to stop using them.”

In contrast to New York, Florida focused a huge amount of attention on protecting their many care homes for the elderly. They ensured that the homes had PPE, that people accessing homes were not infected and they spent the necessary resources on ensuring that the homes had the care they needed. They realized that if the homes were not protected, then hospitals were more likely to be overwhelmed, even if the hospitals were given PPE and other resources. In other words, the care homes and those working in them had to be given priority.

As was described in an article in the National Review on May 20th, the governor of Florida, Rick DeSantis was initially criticized for his approach while the Governor of New York, Andrew Cuomo was being lauded for his. However, it is now clear that Cuomo’s approach that allowed infected people to be sent back to care homes was a disaster, while DeSantis’ approach continues to show itself to be effective. Also, Florida ignored all the forecasted projections as they did not make sense.

Florida has 4,000 long term care facilities and 350,000 residents and their constant focus on this most vulnerable group of people was the most successful strategy to combat Covid-19. Other states that had a similar strategy, Georgia, Texas, Arkansas and Utah did well. New York stands out as a notable exception. The NY strategy did not protect the elderly, on the contrary it led to a shocking number of mortalities in care homes, and the conflation of this high death rate with the deaths from the NY population as a whole, created panic in the rest of the country.

The figures above speak for themselves. New York has had 31,000 deaths from Covid-19, with an estimated 50% or more as care-home deaths. New York’s deaths are much higher than any other state. Florida, on the other hand, has had less than 3,000 deaths. A dramatic difference given that their respective total populations are similar: Florida 21 million and New York 19 million residents. Governor Cuomo may have some serious questions to answer from the families who lost their loved ones when they were reassured the strategy was to protect the vulnerable. It could/should dent his future political aspirations.