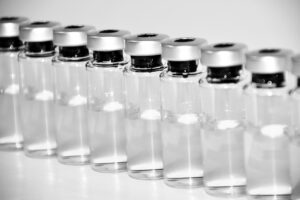 Answer: when it’s another vaccine, known to cause adverse effects. The Oxford / AstraZeneca study is using the meningitis vaccine as its ‘placebo’. The meningitis vaccine is known to produce serious adverse effects in a high number of recipients. Their vaccine trial has now expanded into Kenya. It was already running trials in South Africa, Brazil, the USA and the UK but recently had to halt its studies due to two cases of transverse myelitis (a serious neurological condition) in trial subjects. The trial re-started somewhat controversially, with the partners stating there was no connection between the severe adverse reactions and the vaccine. However, the Food and Drug Administration (FDA) in the USA has prevented recommencement of the trial to in the USA.

According to the Standard Newspaper in Kenya on September 10th, Kenyan authorities had not been aware of the suspension of the trial even as it was giving its go-ahead for trials to begin in Kenya.

The Kenya trial is working under the auspices of the Kenya Medical Research Institute (KEMRI) in Kilifi County. KEMRI is the Kenyan equivalent of the Centers for Disease Control and the Kilifi branch has been partnering with the Wellcome Trust of the UK for many years. Kenya is also participating in another trial on the use of Hydroxychloroquine/Chloroquine, the COPCOV, to explore the possible use of the drugs to prevent symptoms of Covid19. Previous trials on the use of Hydroxychloroquine, including one done by the WHO as part of its Solidarity Study, were controversially stopped due to the high doses used. The doses, known to be toxic, led to the death of some participants and accusations were levelled at the WHO, amongst others, involved in the trial.

In the vaccine trial being started with KEMRI/Wellcome Trust and Oxford University, the first phase will give 40 volunteers either the vaccine or the ‘placebo’ control of a rabies vaccine. If that initial safety trial is successful, another randomised 360 participants will be given either the vaccine or the control. Use of the rabies vaccine as a ‘control’ is being justified as a benefit to the volunteers who will get some protection against rabies. However, this raises the question of confusing the results. The rabies vaccines is known to produce serious adverse effects in some people, which might mask the potential for serious adverse effects from the COVID19 vaccine. It risks confusing the results if the ‘placebo’ group also shows adverse effects, since it can be claimed that similar adverse effects in the COVID19 vaccine arm were not caused by the vaccine itself, because the ‘placebo’ arm also showed similar responses.

This is not the first time that vaccine trials using another vaccine as a ‘placebo’ control, has brought up questions about the design of such trials.

In September the East African newspaper, announced that Kenya will be given access to a vaccine in 2021 if one is ready for use and up to 9.4 million doses of the vaccine will be made available to most essential workers in Kenya.

Kenya will receive the Covid-19 vaccine in small portions from 2021 until the country has enough to vaccinate the people at “the highest priority” when the vaccine is available, the World Health Organisation (WHO) has announced.

In a report published on its website on Monday this week, the WHO said that each country, including Kenya, will get doses that vaccinate one in every five people, which is equivalent to 9.4 million people. However, in the first stages when the vaccine is expected to be scarce, Kenya will receive doses in little portions until the Ministry of Health has enough to vaccinate three per cent of the population.

In the document, WHO outlined how it would distribute the vaccine to Kenya and all the 156 countries that signed up for Covax, a Covid-19 vaccine allocation plan which is led by WHO, Gavi, the Vaccine Alliance and the Coalition for Epidemic Preparedness and Innovations (Cepi).

It would seem, therefore, that part of the incentive to get Kenya to join the vaccine and drug trials is the promise that it will receive doses of the vaccine, if one is ready and safe to use next year. The trial in question in Kenya will take 24 months and therefore, unless a vaccine is fast tracked and avoids completing longer term safety and efficacy trials, any vaccine coming to Kenya will be from another vaccine company.

The Dangers of Challenge Studies

Vaccine companies involved in the race for the COVID19 vaccines have received ethical permission to run challenge studies, where subjects are deliberately infected with a pathogen after receiving a vaccine. This is done specifically to ascertain the effectiveness of the vaccine in producing antibodies and immunity. Given the risks involved, it is normally never done unless there is a clear and effective treatment for a disease. According to those making policy, this is not the case with COVID19 and therefore the ethics of performing a challenge study must raise serious questions.

Nonetheless a challenge study is planned for the Oxford University/AstraZeneca vaccine trial, as well as the one at the Royal Free Hospital in London. Both are supported by the UK government. In the race to find a vaccine, the ethical issues of deliberately infecting people with the virus is deemed to be justifiable.

The article states the following:

A vaccine is important, because Sir Patrick (Vallance, UK Chief Medical Officer) noted that just “something under 8 per cent of the population” have been infected and/or have antibodies. It may be higher in the cities, as high as 17 per cent, he said, but added that the vast majority of us do not have immunity. Even those who do have antibodies will probably see their immunity diminish over time.

Challenge studies are highly debatable given the risks involved, including fatal outcomes. This has been well-known for a long time.

One potential way to speed up the development of a vaccine for Covid-19 is a “challenge study,” in which researchers give healthy subjects a prospective vaccine and then infect them with the coronavirus. In conventional trials researchers typically give subjects either a test vaccine or a placebo and follow them over time in their ordinary living conditions to see if the vaccine is effective. But there’s no need to wait for a naturally occurring infection in a challenge study, which allows it to be shorter and to require far fewer subjects. Yet such a study would also require deliberately giving those subjects a potentially deadly illness for which there is no good treatment, and for some observers, that’s a deal-breaker. A joint statement by the AIDS Vaccine Advocacy Coalition and the Treatment Action Group says, “Until there is an approved treatment, a challenge trial with a potentially fatal and as-yet untreatable pathogen is unacceptable.”

Nonetheless, the drumbeat for Covid-19 challenge studies is growing louder, and some of the most energetic drummers are bioethicists. Nir Eyal, a bioethicist at Rutgers, was one of the first to call for them. His proposal, cowritten with the epidemiologists Marc Lipsitch of Harvard and Peter Smith of the London School of Hygiene and Tropical Medicine, appeared online in late March. Challenge studies have also been endorsed by the NYU bioethicist Arthur Caplan and the vaccinologist Stanley Plotkin. Julian Savulescu and Dominic Wilkinson, bioethicist-physicians at Oxford, have raised the moral stakes even higher by proposing not just that researchers conduct Covid-19 challenge studies but that the first human subjects could be elderly nursing home patients. “Their motives might be purely altruistic,” Savulescu and Wilkinson wrote. “Or they may be fatalistic or wish to die, or at any rate not care if they die sooner rather than later.”

It will have to be seen whether they will want to do a challenge study in Kenya or another African country, given the valid notion that drug companies have repeatedly used Africans for drug research. Even though challenge studies are going to be done in the UK and elsewhere, it is distinctly possible that they could be rolled out in African countries as well. Given that the Kenyan government didn’t even know that the AstraZeneca trial had been suspended, it should ensure it is given all the facts before agreeing to do challenge studies for a Covid19 vaccine.

Patrick Vallance’s statement that the vast majority of people do not have any immunity to COVID19 relies only on the prevalence of antibodies, when a huge amount of research has already identified T cells to be the driver of immunity to COVID19, and this is already prevalent in the population.

That the Chief Scientific Officer of the UK can make such a dubious statement when so much is now known about COVID19 must only further compromise his scientific and professional integrity.