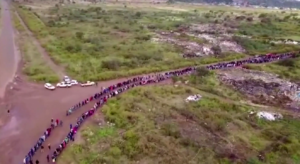 As reported in previous posts, South Africa has imposed one of the most draconian lockdowns in the world. After two months and a small shift from Level 4 to 3, the consequences are making themselves known. To add to the confusion, more and more tests are being done to check if COVID19 is declining. There is a disconnect: being positive for COVID19 does not mean getting sick. More positive tests show that more tests are being done, but not how sick people are, yet this is being used to justify continuing the lockdown and the suffering of the South African people.

Articles from the Daily Maverick and the BBC explore the situation and the challenge the government finds itself in as it gradually reduces lockdown. It seems reluctant to lift restrictions in spite of the terrible damage to the economy and the livelihoods of millions of people. People are asking why the government would take this path and why decisions are being made by the National Coronavirus Command Council (NCCC) and the National Joint Operational and Intelligence Structure, despite the fact that they are not publicly accountable or established by regulation.

The situation on the ground is very dire. Already people unable to work are hungry, and many have waited for up to fourteen hours for a small bag of food. How long can this be sustained by millions of people?

Queues for government food parcels in the townships have stretched for miles.

However, the focus is still on the number of positive tests, even though it may be the result of the number and quality of tests being done. In the Daily Maverick of May 21st, ran the headline: Unravelling the riddle of the Western Cape’s high Covid-19 numbers.  (Western Cape is the southwest region of South Africa, including Cape Town that borders the Indian and Atlantic Oceans. It encompasses the tip of South Africa). The Maverick writes,

The Maverick writes, “As of 20 May, the Western Cape accounts for 11,262 of the country’s total 18,003 confirmed Covid-19 cases, just over 62%. The cumulative Western Cape Covid-19 death toll is now at 211, while the other eight provinces have together contributed 128 deaths to the national total.

On social media, the Western Cape’s grim tally has seen its residents accused of bringing the situation upon themselves by not adhering to pandemic mitigation efforts. In response, the Western Cape government has repeatedly pointed out that the province has been undertaking strategic testing at a scale that no other province has come close to matching.

The records bear this out. Between 20 April and 10 May, for instance, the testing report compiled by the National Institute for Communicable Diseases (NICD) shows that the Western Cape accounted for almost a quarter of all lab tests conducted nationally: 51,248 tests out of a total 222,209.

It is not just the volume of testing the province is undertaking that is significant, but also the kind of testing. Provincial health spokesperson Mark van der Heever told Daily Maverick: “Our screening and testing teams are deployed based on data which actively identifies and follows the ‘bush fires’ – the pockets of infections within communities.” In other words, the province is proactively testing people in areas which have already been identified as likely coronavirus hotspots, so the tests are likely to come back positive.”

It is interesting to see how the situation in South Africa is being monitored in the media and whether there is some other agenda being played out to justify maintaining such a strong lockdown in the country.

The BBC reported on May 20th that deaths in South Africa could “soar” in the coming months:

“At least 40,000 people could die with coronavirus in South Africa by the end of the year, scientists have warned.

The projections were made by a modelling consortium set up to help government planning over the outbreak and assumed that tough restrictions will be eased from 1 June, as President Cyril Ramaphosa has promised.

The curbs – which include a ban on alcohol and tobacco sales – have been credited with slowing the spread of the virus, with 17,200 cases and 312 deaths reported so far, way less than the figures in Spain, which has a smaller population, says the BBC report.

While President Ramaphosa has said lockdown regulations would be eased from “level 4” to “level 3” from early June, Health Minister Zweli Mkhize has said that according to the World Health Organization (WHO), South Africa is not yet ready for level 3 because infections continue to rise every day.

Meanwhile, the opposition party is taking the government to court, arguing that the stringent regulations are unwarranted and the ban on alcohol and tobacco sales should be lifted.

The BBC article that day takes the information at face value when it likely comes from a South African government source, which only says a modelling consortium came up with these “facts”. Who are they and what are their affiliations to the government? Where does the 40,000 figure come from? Given the impossibility of predicting anything, as the “experts” at Imperial College in the UK showed us, can this be believed? As South Africa goes into its normal winter flu season, will any increase in deaths be the result of the flu and not COVID19? Are there enough tests to make sure that this distinction can be made?

According to Worldometers, as of May 25th, South Africa has 23,615 confirmed cases in a population of 59 million. There have been 506,861 tests done and 481 deaths so far in the entire country. Given the unreliability of testing and the fact that many people have COVID19 but do not express symptoms, it’s not possible to draw any conclusions from this. As was discovered in Europe, the only important figures are those cases needing critical care which might overwhelm the health service, and the number of deaths. The current death rate in South Africa is currently 6 per million of the population.

And yet the WHO warns it is too soon for South Africa to move to Level 3 as infections continue to rise. As seen in the Daily Maverick, there are more cases in Western Cape because the testing is focused on hotspots identified by the health authorities. How can the WHO make such a drastic recommendation on such limited evidence, in a country where so many millions live hand to mouth?

It seems likely that South Africa is being held up as a model of the global lockdown, especially for Africa, and as such the WHO wants them to continue as long as possible, irrespective of the profound socio-economic implications, which are likely to be far more devastating than in Europe or the USA. The Democratic Alliance opposition party is attempting to question the government’s decision. It is interesting that the opposition Party is in power in the Western Cape region, where there has been the most testing, and therefore have shown a higher numbers of cases.

What these articles reveal once more is that the figures alone cannot be used to justify the current actions of the government. The extraordinarily low numbers of cases and fatalities in South Africa so far, don’t support the description of a devastating pandemic. Every death is a tragedy but keeping millions of people in their homes for weeks and months unable to work, with the threat of beating and possible death if they are found to break the imposed curfews, will prove more tragic.

While the South African government will justify the low numbers as being due to the lockdown, it is having to go the International Monetary Fund and ask for $20 billion to keep the country going, with no end in sight.

Image: a still from the Reuters aerial footage of food lines in South Africa https://www.reuters.com/article/us-health-coronavirus-safrica/aerial-footage-shows-miles-long-queue-for-food-aid-in-south-africa-idUSKBN22C1TU