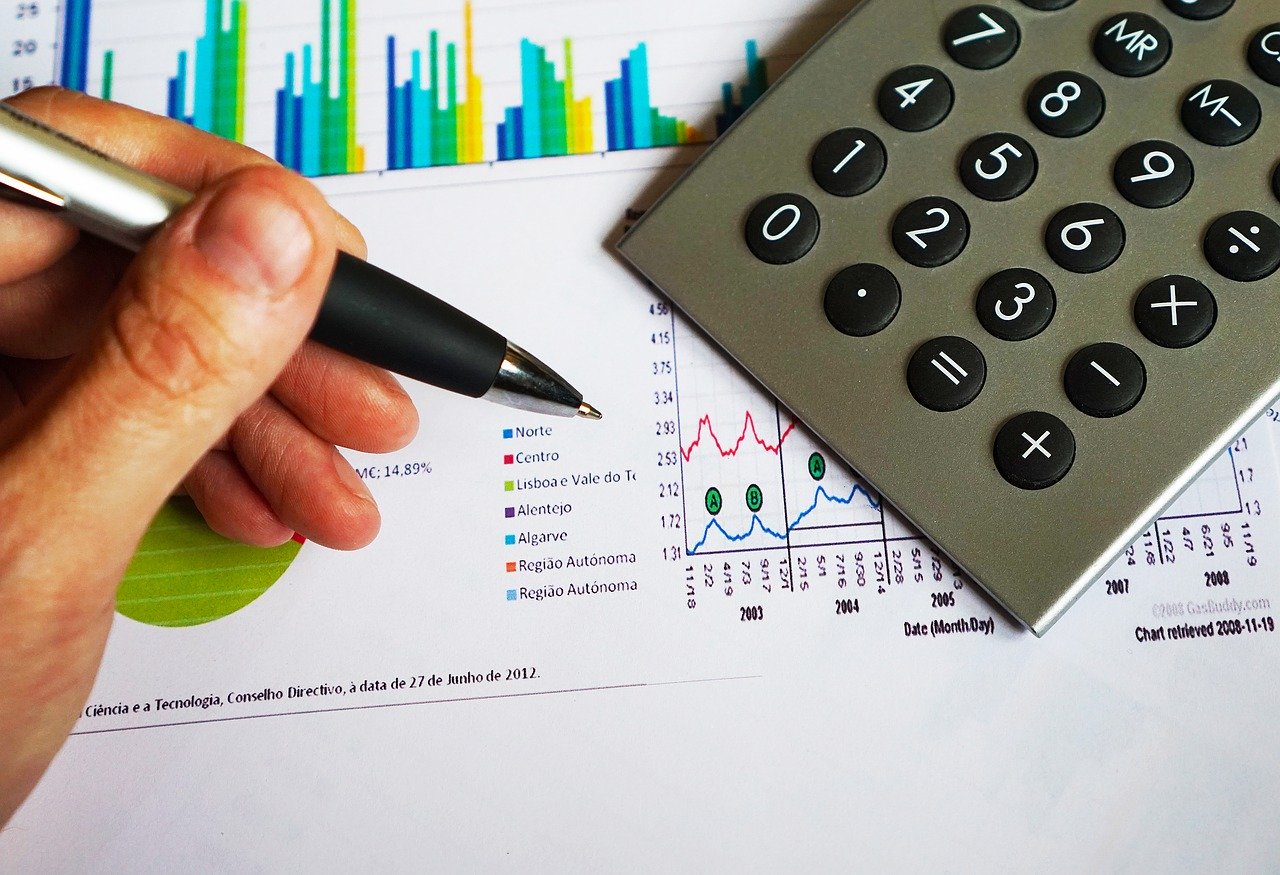 We are being bombarded by number of cases, confirmed cases, recoveries and deaths from COVID-19. It is hard to follow and also to know what is really true. Are the deaths under counted as has been suggested or exaggerated due to people now being tested more than ever and any death being attributed to COVID-19 even if a person died of something else. In the USA, people are being told to attribute death to COVID-19 even without a positive test if it seems it looked like COVID-19!

In a “normal” week in the UK, over 50,000 die of many things. When they die, the official diagnosis at death may or may not indicate something. They may die of pneumonia, a heart attack, consequence of a stroke, or simply take a last breath and pass away. Many of the deaths now being attributable to COVID-19 would have died anyway. COVID-19 was not necessarily the main factor.

However, it is also true that many people are dying of a terrible form of hypoxia where they seem to be suffocating to death and would not have died in the coming months or years, but that is a small minority of the now 200,000 global deaths. At this time, the number of deaths is similar to a flu season. Approximately 20,000 die each year in the UK from consequences of the flu. In the USA it is between 30,000-60,000 depending on many factors.

The current lockdown is an attempt to curb the numbers of cases and fatalities but there is no strong evidence that it has worked. There is no evidence that the virus is spreading among the healthy members of the world. Much has been talked about Sweden, which did not initiate a full lockdown and left it mostly to voluntarily social isolation. Most things stayed open. Some people are saying Sweden is showing more cases in comparison to other similar Nordic countries and populations of a similar size. However, taking the official figures being presented, that does not seem to be the case and there is no statistical difference between Sweden, Norway and other similar countries. In Sweden, extrapolating from the numbers of cases and tests and mortalities, there would be 2 million cases in the country but with only about 2,000 deaths. That is a mortality of 0.1%, about the same as the flu in most countries. In the USA, where New York State is the largest area affected, there has been over 19,000 deaths, with a 92% recovery rate and 0.1% chance of dying. In California there has been about 1,300 deaths, with about 34,000 positive cases. The positive rate was about 12% of all who were tested. Given those figures, there is 0.03% chance of dying in California. This is different than the projections of the Governor of California, Gavin Newsom, who predicted up to 200,000 deaths. 96% of those who test positive recover. These figures are no worse than an average flu season. What is different perhaps is the way some people are dying. However, the overall numbers are no different than the flu. The Centers for Disease Control and Prevention (CDC) in the USA estimated that the death rate from flu was between 30-60,000 annually, which given the population of the USA comes to about 0.13% chance of dying.

With the advent now of more widespread testing, we are now likely to see an escalation of the numbers of cases, creating yet more fear and perhaps prolonging lockdown. However, many of those tested won’t even be aware of being sick. They will simply show an antibody response. The key figure is to measure the numbers intensive care and the number of mortalities. It is therefore important to know how many of those mortalities was definitely due to COVID-19, not just with a positive test but also showing specific symptoms that are unique to the COVID-19 virus.

When analyzing figures, especially death rates due to COVID-19 certain considerations have to be considered as figures vary a lot, even in a European context where one would imagine infections and death rates would be similar. For example, Germany has a very low death rate. The following list are some of the considerations that could affect the numbers of deaths:

The following chart shows official figures given on April 24th, with approximate populations. They are listed in order of confirmed cases. Highlighted are all countries with deaths under 1: 10,000 population. 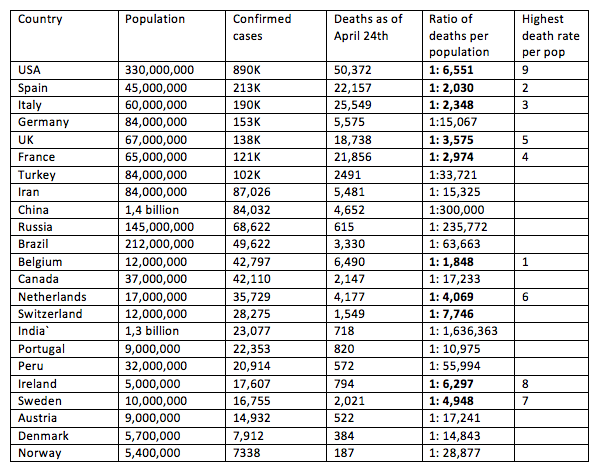 Even from these figures, with all the possible variables that could lead to distortions or unfavourable comparisons, it is clear that the most affected countries are predominantly in Europe. Only the USA is in the top 9 out of 10. China, given its huge population is way down the list of average deaths for the population.

Sweden is 7th in the list of the number of death ratio per population. Therefore, one can say that so far, Sweden’s approach has not showed that it is significantly different than the most affected countries. It is being compared to surrounding countries like Norway and Denmark, whose percentages are similar to Germany, but they have different demographics. Norway is a large country and apart from a few urban areas, is quite spread out. However, statistically Sweden’s cases are not much different than the rest of Europe. Belgium is interestingly first on the list. Holland, which has very similar demographics, population density and other factors is 6th on the list. Spain and Italy are 2nd and 3rd. Interestingly, these countries have imposed the strictest lockdown of any European country. As has been noted, Northern Italy has been a hot spot for the disease, but also has a very high elderly population and some of the worst pollution in Europe. The same can’t be said of Spain. France and the UK are 4th and 5th. They have similar populations. The UK is significantly more densely populated, yet the density of urban populations is similar. The UK most likely has more cities which are more densely populated.

Therefore, the fact remains that even in the hardest hit parts of Europe, the overall mortality rates are similar to an average flu season. There was perhaps a greater spike of serious cases than seen in previous flu seasons, leading to the crisis interventions we are now seeing, but overall, the numbers of cases do not seem to be spreading into younger and healthier people.

The WHO warned recently that Africa could be the next epicentre of the pandemic, warning about steps needed to be taken to prevent this. However, as with many other projections until this point, it seems to be a case of the most pessimistic projection possible, instilling fear and chaos into many countries. The question should be, why does Africa have so few cases? Is it the lack of testing and the lack of monitoring of mortalities or simply that the cases aren’t there? Given the fears that the health services couldn’t cope in the event of a wide outbreak, we would have seen the cases fill the beleaguered health systems, especially in large urban areas like Lagos, Addis ababa, Nairobi, Dar es Salaam, Johannesburg. At this point, this has not happened.

Half of African countries have initiated some forms of lockdown. South Africa has initiated one of the strictest lockdowns in the world, restricting millions of people to their homes, including in the many congested townships. Given the numbers of deaths so far, at about 90 in a country with an estimated 59 million people it seems an extraordinary overreach on the part of the government. The economic costs cannot be overstated for Africa, as well as the terrible social issues that may arise. Not all countries have followed this lockdown model, Tanzania standing out for recommendation from the World Bank for its approach, limiting the economic impact through not imposing a rigid lockdown.

When looking at the figures below in Africa (as of April 25th) , it is staggering how few cases there are. The Ratio is often one death per 1-10 million of population. There are many more important issues to deal with in Africa than destroying the economies of countries in trying to suppress the spread of COVID-19. 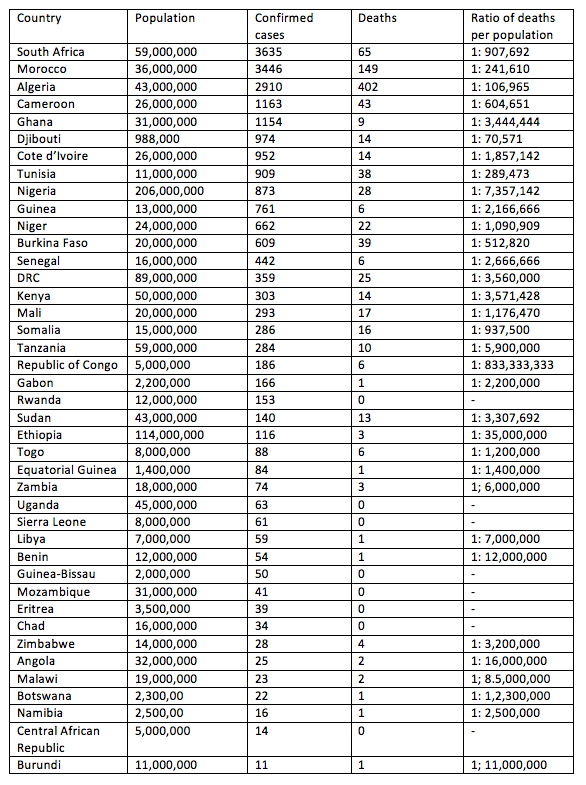 Currently, as of April 27th, there have been only approximately 200,000 known deaths globally from COVID-19. Some feel the real amount of deaths is much higher, but we don’t know. One can also make the argument that out of the 200,000 deaths, about half of these would likely have died soon anyway, of other existing conditions. COVID-19 in a sense pushed them over the edge. Therefore, one can say that only 100,000 people have died directly from COVID-19 given current figures. Some analysts are attributing “excess deaths” to COVID-19 but it is difficult to prove this.

Given the figures above, it can be said that the reaction to the pandemic has been vastly exaggerated, threatening the global system, including political and economic stability. The imposition of new laws, profoundly limiting freedom of movement under the pretext of public health is highly questionable. The gross manipulation within the media, exaggerating risks and believing what “experts” are saying, many of whom are heavily invested in a new vaccine being the only solution, even if it is not available yet. Billions of dollars are being pumped in the pharmaceutical industry, at tax players expense, profoundly disturbing the economy in most countries. In the developing world, this impact is already taking a huge toll.

The fundamental idea that the virus would lead to the deaths of millions has not been seen. All evidence shows it seriously affects mostly the vulnerable, immune compromised and aged. There are exceptions but they are exceptions. Therefore, the current reaction of world governments is mistaken.

The powers of the pharmaceutical industry to further manipulate this situation for profit and the thousands of medical professionals whose career will benefit from this pandemic should be seriously questioned. We are being told by “experts” that this is the right course, but the evidence says otherwise.

(There’s a more in depth piece on the numbers in the Indepth section.)