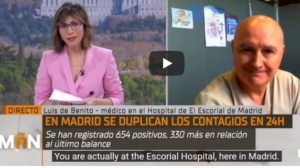 On this blog we have highlighted the numbers issue from the very beginning. Over time it has emerged that there were many confusing and confused ways of reporting what was a death from COVID19 and what was a death with COVID19: a patient with serious comorbidities who tested positive for COVID19 or was assumed to be infected. The UK government admitted 47% of deaths attributed to COVID19 took place in care homes. Recently they removed another 5,000 from the total because of reporting discrepancies: any one who ever tested positive and later died from any cause, would be called a COVID death.

As the SARS-cov-2 virus in the UK completes the same bell curve that all viruses follow, deaths have plummeted, hospitalisations are few and ICU beds largely empty.

However there is no good news from the government or the main stream media. The focus has shifted from the daily death count to the number of positive cases and the ‘hotspots’ in various parts of the country. The North West and Greater Manchester has declared a ‘Major Incident’ and gone back into a harsher lockdown. On a daily basis we are warned about the ‘second wave’ coming in the Autumn. On this site we have explained that the RT-PCR test used is not reliable, that it was never designed to be diagnostic, that some 80% of positive tests will asymptomatic, that more testing means  more ‘positives’ and yet the narrative continues about rising cases.

What does it mean when there are 645 new cases in a population of 2.8 million in Greater Manchester? Approximately 80% of those cases will be asymptomatic, leaving 173 cases, or 6 cases for every 100,000 people. If all the remaining 173 did need hospitalisation, the NHS can easily cope, in part because the medical system has still not resumed working. An estimated 10 million hospital appointments are waiting to be assigned, hundreds of thousands of people waiting for cancer tests, cancer treatment, surgeries postponed and so on.

The level of fear this constant focus on case numbers incites, is doing actual harm. Fear weakens the immune system, the very thing we need to be strong at a time like this. Fear is harming people’s mental and emotional health. It’s separating familes and friends, it’s isolating elders at a time of life when they need comfort and support.

Here’s one doctor in Madrid who tried to tell his truth to the Spanish equivalent of the BBC.

And a similar story from a top Professor of Medicine speaking out on French prime time TV here:

Other doctors in other countries are also speaking out, led by German medics – their voices can be heard here with English translations.

It’s time we all took a clear eyed look and asked WHY?