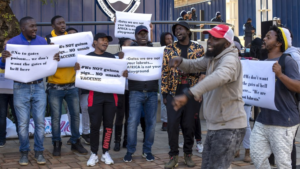 (AP Photo/Themba Hadebe) Demonstrations have broken out in South Africa regarding the proposed vaccine trials being run by the University of Oxford, one of the competitors in the race to bring a COVID19 vaccine to market. The demonstrators at Witwatersrand University in Johannesburg, questioned the safety and ethics behind the trials, and held banners saying they didn’t want a Gates Foundation vaccine. They expressed concern that the testing was going to be done on poor people and noted that the vaccine hadn’t even been tested yet in Europe or the USA, where the outbreak is more serious. Demonstrators also raised the comments made by a French researcher two months ago, regarding testing new vaccines on Africans first. The researcher had said “If I can be provocative, shouldn’t we be doing this study in Africa, where there are no masks, no treatments, no resuscitation?” He compared it to some AIDS studies: “In prostitutes, we try things because we know that they are highly exposed and that they do not protect themselves.”

These remarks caused immediate controversy and the WHO Director General condemned them, saying they were unacceptable. However, the damage for many, had already been done.

The organiser of the protest in South Africa, Phapano Phasha, told The Associated Press ahead of the event, “The people chosen as volunteers for the vaccination, they look as if they’re from poor backgrounds, not qualified enough to understand.……We believe they are manipulating the vulnerable.”

Phasha continued, “The narrative we got is our continent is a dumping ground. First ensure the vaccine works elsewhere before bringing it to Africa……Why not target more affluent parts of South African society? I believe in science,” she said, “And I believe that science has managed to solve most of the problems society is faced with. I’m not against vaccinations, I’m against profiteering.”

Fellow protesters sang and danced with banners saying “We not guinea pigs” and “No safe vaccine.” Demonstrator Sean Goss added, “If you want to test, test in the areas which they call the epicenter of the world.”

Two thousand people in South Africa have been recruited to take part in the trial, the rationale for the need to test in Africa and Brazil is that COVID19 cases are still rising so that any clinical effect of the vaccine will be easier to determine. The article also stated the opinion of some researchers as to why a vaccine trial should be held in Africa.

“Africa must play a role in the new vaccine trials”, the vice chancellor of the University of Cape Town, Mamokgethi Phakeng, and the chair of South Africa’s Council for Scientific and Industrial Research, Thokozani Majozi, wrote this month in the Sunday Times newspaper. They, too, brought up the French researcher’s comments and they criticized the calls for an “African-only” approach to finding a vaccine, saying it would pull the continent even further from the global stage. “It would be tragic if Africa chose not to take part, at all levels, in clinical trials of a Covid-19 vaccine — or any medical treatment that could save lives,” they said.

Given that historically drug and vaccine research all over the world has always tended to be done on poorer people, or on prisoners, military personnel and historically in the USA on black and Hispanic people, without consent, the concerns of people in South Africa are valid.

The infamous forty year Tuskegee experiment in the USA, in which 399 African Americans men with syphilis were followed throughout their lives, and deliberately left untreated even though effective treatment was available, still resonates with the black community. It led to the deaths of many men, including their wives and some of their children and was only stopped in 1972.

Africa has had its own experience of troubled testing and treatment. Families in Nigeria took Pfizer to court and finally won substantial payouts after several children died of meningitis in a clinical trial for an oral antibiotic in 1996.

Earlier this year, South Africa’s Commission for Gender Equality said dozens of HIV-positive women had been forced or coerced into sterilization after giving birth at public hospitals.

Another more recent controversy was the suspicion that the World Health Organization tetanus vaccines given to pregnant women, were contaminated with Human Chorionic Gonadotropin (HCG) in order to produce a “birth control vaccine.”

Conjugating Tetanus Toxoid (TT) with HCG causes pregnancy hormones to be attacked by the immune system, leading to abortions in already pregnant women and infertility in women who are not pregnant. Evidence shows that the WHO has been researching more potent anti-fertility vaccines using recombinant DNA for some years, and as far back as 1976 had been able to produce a “birth control vaccine.”

Although the most recent controversy with the tetanus vaccine was disputed, the Kenyan Catholic Doctors Association reported the scandal and it was followed up and reported by the Washington Post. Three different laboratories in Kenya isolated HCG from samples of the vaccines, where none should have been present.

Given this history, it is not surprising that Africans would be suspicious of the motives of drug companies looking to test experimental drugs and vaccines in Africa. The history of drug and vaccine research has been fraught with controversy and accusations of exploitation, both in Africa and in poor areas of Europe and the USA. The fact that this is happening now in South Africa, also reflects a further concern that COVID19 vaccine research is being rushed without due caution. In Africa, the mortality rate for COVID19 is still very low, even in South Africa, with one of the highest death rates on the continent at 2,800 people in a population of 60 million.

The impact of three months of serious lockdown has, by all accounts, had a much more serious impact than the virus.